PRESS RELEASE: NEW MUSIC CD BY ANOQ OF THE SUN 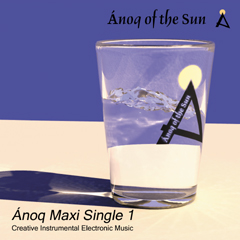 The music is, to a great extent, inspired by the music of Jean Michel Jarre, but also other musicians, ranging from Deep Forest over Depeche Mode and Enya to the symphonic sound tracks of Hans Zimmer.

It is available from www.anoq.net/music, in all CD shops in Denmark and through many online download shops world-wide. The CD is meant as a taste of an upcoming full album in 2008, which will be titled Ichography.

The first track on the CD, Aqua Aerobics, is inspired from a certain aqua aerobics class in Copenhagen and is intended to be played there, whereas the last track, Egypt Techno Part 2, is a by-product of the as yet unreleased Egypt Techno Part 1, which is originally inspired by some of Natacha Atlas' music. The title Egypt Techno refers to "if traditional Egyptian musicians were trying to make techno music, then how would it sound?" and is therefore not actually techno music. The other 3 tracks, Etnoq Parts 1 and 2 and Source-X, also display a variation of styles and usage of rare musical scales, as if they were the most natural scales to use.